skip to main | skip to sidebar

Feature Article in "The Tennessee Magazine" 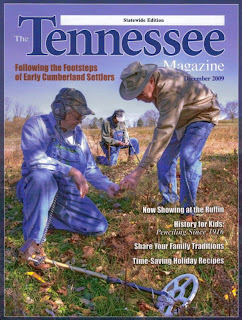 The folks at "The Tennessee Magazine" feature our book and work in the December 2009 issue. The magazine is distributed monthly to over 500,000 members by Cumberland Electric Membership Corporation.

They did an exceptional job in photography and layout and we have experienced great sales as a result. You can see the entire article by:   clicking here
Posted by Jack Masters at 12:59 PM 3 comments: 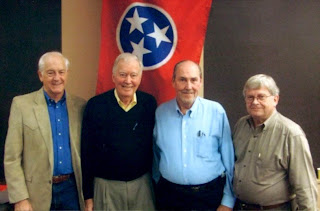 L - R David Wright, Bill Puryear, Doug Drake & Jack Masters
A successful book sale and signing was enjoyed Thursday evening October 15, 2009 at the Gallatin Public Library in Gallatin, Tennessee. We did not get a count of the attendees but we were busy signing books for the entire 2 1/2 hours!!

It's always a pleasure to see our old and new friends who enjoy the thrill of pioneer history in this part of Tennessee!!!
Posted by Jack Masters at 1:46 PM No comments:

Our Founding of the Cumberland Settlements has arrived!!

After years of preparation our Atlas is safely in our warehouse and we expect all pre-publication orders to be shipped the week of October 5th. The best news is that new orders via our site will be immediately filled.

We are pleased with our books and are confident you will be as well. In the meantime, be sure to see our program schedule and if you see that we are in your area we will be more than happy to sign your books. We always have a supply of books at the signings for those of you who have not purchased yet.

Work has begun on the next series and we'll have more on them later.

Jack Masters for
Doug Drake & Bill Puryear
Posted by Jack Masters at 5:08 AM No comments:

Founding of the Cumberland Settlements, The First Atlas 1779-1804, Showing Who Came, How They Came, and Where They Put Down Roots is a piercing, almost breathtaking look at the Cumberland Country. This remarkable book and the accompanying disc that contains plats and descriptions of 1,500 North Carolina land grants represent an incredibly detailed study of its type. Doug Drake, Jack Masters, and Bill Puryear have produced an Atlas, but it is also an easy to read narrative history, a biographical sketch book, a trails and roads study, and an archive. It is a dossier of North Carolina land grants and a series of maps, cross referenced so that land grants, forts, stations, towns and cities, and even the residences of the settlers can be located. Its graphs and tables can lead one to elusive and at times unremarked history. It is majestically and copiously illustrated by David Wright and co-author Puryear. The combined, non-redundant indexes of the book and disc have a total of 18,000 entries.

The authors beautifully answer the question they posited: Who Came, How They Came, and Where They Put Down Roots. This is a valuable resource for anyone interested in early Tennessee and western history. It will surely be on the shelves of public libraries and universities in Tennessee and beyond. It is a special treasure for all of us who live in the Cumberland country.

--Walter T. Durham, State Historian
Posted by Jack Masters at 5:38 AM No comments: 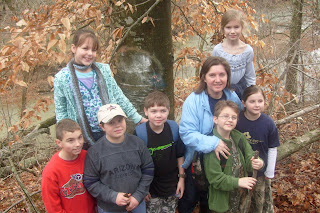 This is no ordinary group of school children. It's a special history class at Dayspring Academy in Greenbrier Tennessee. Seen here the class is viewing an old tree in a property line of Thomas Kilgore's 640 acre North Carolina Land Grant. We think the date is most likely 1785.

This class has tackled tough questions as to the possible location of Kilgore's Station and while the exact site is yet to be proven a selection of possible pioneer relics discovered by class members suggest a location which may just be the site. More on that topic later.

Paula Eller and her father, Ted Melton have helped mentor this very gifted class. Field trips allow the class to gain insite to Robertson County Tennessee history in ways that few ever enjoy.
Posted by Jack Masters at 6:36 AM No comments:

New News page today - I'll have to determine content and direction.
Posted by Jack Masters at 10:34 AM 1 comment:

Jack Masters
Gallatin, Tennessee, United States
Retired from Aladdin Industries in Nashville, TN. since 2003. Busy with Cumberland Pioneers book series for the past 4 years and looking forward to continued activity with Volume II.